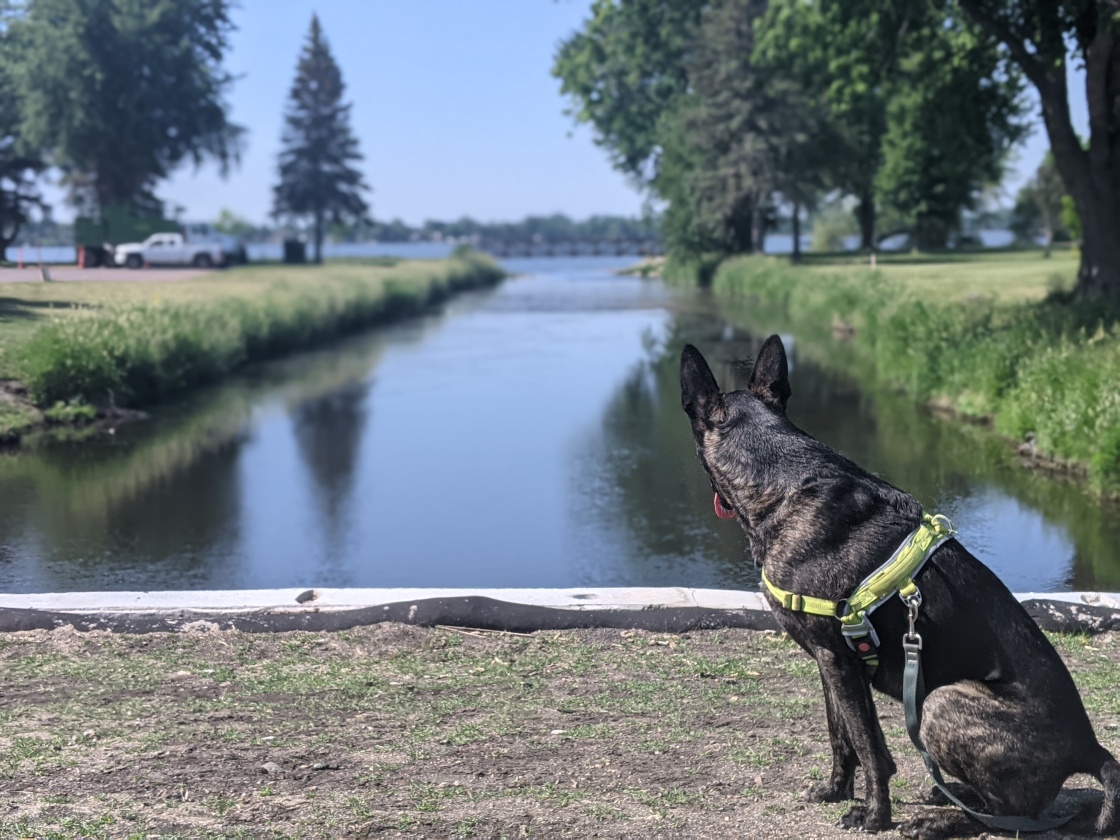 And the flies, damn the flies.

Coming out of Washington State, it was already getting warm; but I had no idea what I was in for.

Now, a little over a week in, I am really glad that this trip is not intended as an end result but as a means to a much more relaxing, much less grueling purpose. As much as I love to sleep in my van, and probably will continue to sleep in it after I have my wagon hitched; we are doing this big trip with the intention of bringing home a Road Gypsy custom wagon. I close my eyes and I can see it – Lucky Green with Goldfinch Yellow trim and shutters, parked on a beach somewhere while the sun sets slowly behind it.

We’ll be there soon enough; and if I plan to sleep in the van much of the time – enjoying the moonroof to stargaze on clear nights or watch the rain bounce off the glass with more typical Washington weather – I will have plenty of space in the 6 x 10 wagon to create my happy place. Mostly, that means books. Lots, and lots, and lots of books. With the walls covered floor to ceiling in science fiction, fantasy, philosophy, literature, and the very occasional non-fiction; I hope to have a space that I can dedicate to my writing and really dive into the stories that I have been wading through over the years.

But we aren’t there yet; and where we are – it is hard to see why people decide to be here at all.

I am sure that three weeks ago (when I was supposed to have been on this leg of the journey) the weather would have been much more forgiving and I would be singing a very different tune. As it is, my motivation to take my time and enjoy the trip is waning significantly. I was told at the last rest stop we stopped at that we have set records every day for the last week for 1) the hottest day for each calendar date and 2) the most days in a row over 90 degrees. Not records that I wanted to be able to experience at any time in my life. With such intense heat informing my judgement; it’s reasonable that many of the areas I have gone through are fine to live in most of the time. Still, I can’t imagine dealing with the dryness, the general lack of services in many areas, or the ill-maintained roads and parks.

Washington really is a place of its own.

All of this complaining isn’t just from mine and Bruce’s lack of experience with the heat – it really has changed the entire trip.

I first became concerned several days ago when my phone decided to start turning off due to heat. We were passing into South Dakota from Wyoming and I was watching the temperature gauge pretty closely to see how high it would go. When we got into the 90s, I was pretty sure that was the highest that I have seen on the gauge. Obviously we get over 90 in Washington every once in awhile – at which time you can find me in front of a fan with a glass of ice water, most likely without clothes on. Not sitting in the van. Anyway, we got passed 90 and I thought things had leveled out at 93. It stayed that temperature for long enough that I stopped looking down until; in absolute disbelief, I glanced over and saw the gauge reading 99. I was pretty sure that I hadn’t seen it reach 90; I was 100% positive that I had never seen it reach 100. Within a half hour it was 108. That number is seared (pardon the pun) into my brain. Luckily, it didn’t go any higher and the van did it’s job in keeping me and Bruce at a reasonable temperature. I did have to stop rolling down the windows as often for Bruce; because even at 75 miles an hour the air coming into the car through the window was raising the temperature significantly.

We kept enjoying ourselves and hitting not only the planned stops but also stopping at rest stops and parks along the way to stay hydrated. Dinosaur Park in South Dakota was really cool; Bruce showed an initial interest in trying to figure out what the sculptures were all about and there were somewhat shaded hiking trails around the area with the most amazing view. Still, we could have spent three times as long there if it weren’t for the heat. We had to walk down the stairs to where the van was parked in order to get more water and cool off in the visitor center’s air conditioning and at that point I couldn’t bring myself to make Bruce go back up.

It hasn’t been as hot since that day; but my electronics are still freaking out! My phone turns off due to heat about once a day. Nothing seems to hold the same charge that it did before. And suddenly my smartwatch is completely glitching out. It was a very inexpensive watch that I got a few years ago – so I got way more than my money’s worth in my opinion. But it is unfortunate timing for it to stop working given that I was really interested in seeing my sleep and activity levels throughout this trip. I have enough information to make some good conclusions about what my body needs to sleep well, how often I go into deep sleep and for how long, and a bunch of other things that will help me in my lucid dreaming and generally staying healthy. Still, I can’t help but be disappointed that I won’t be able to determine an average for the trip. I set a goal that I would average 3 hours of deep sleep per night; and with multiple nights over 4 hours I was well on my way. So I think we’ll just have to call that one a win.

And then the moonroof. I refuse to believe that the shade on my moonroof suddenly not working is the result of anything other than piss-poor service by West Hills Ford. I will continue to call them out as long as they are a thorn in my side; and right now that thorn is long and tipped in poison. A couple of nights ago I opened the moonroof for us to look up at night and not feel so claustrophobic just as I had been doing every night of the trip. The next morning, I new something was up when I looked at the window and saw that the shade was sticking out slightly. Somehow it had gotten caught and when I turned the car on and hit the button to close it, nothing happened. That is, it didn’t move. I could hear the motor trying to turn but it wasn’t successful. I tried a couple of times to push the open and then the close button to try to jostle it loose; but I am no mechanic and I didn’t want to worsen the issue.

I emailed Ford and heard back that the part should be covered under warranty and that I could take it to any Ford for a fix; so later that day we found one and they tried what they could to ‘re-initiate’ the motor with no avail. Luckily, everyone there was friendly and they were big fans of Bruce. If they hadn’t taken a real interest and just told me ‘tough luck’ I would have had to tape paper to the window to provide shade – leaving the back exposed to the sun all day long as we drive just isn’t an option when I have a 75lb black dog that uses the space to cool down. Instead, they got me a giant box and a box cutter so that I could cut a flat sheet out and lodge it in place where shade would usually be; the shop manager even came out and helped me put in. Super nice people and every one of them a dog lover.

With it being so hot the last few days; Bruce and I haven’t had nearly as much energy. I still am able to find shaded areas at the state parks and other attractions that we planned so that Bruce can have time to explore and get lots of walking in; then we try not to melt through the afternoon until it is time to go sweaty to bed.

For me, time at the camp site is nice; I love to read and I had been really disappointed in myself for not finishing Ready Player Two back in February/March. Part of the reason for that was that I wasn’t as impressed as I’d been with the first book and I took a few weeks from it to finish my own book Mutiny; but my brain power this year has been pretty zapped. With personal struggles a plenty I just haven’t been able to focus on reading a book. In the week that we have been out here, though, I finished Ready Player Two; purchased Lawless Prairie from a Safeway in Wyoming and finished that in South Dakota; and book-exchanged that piece of garbage yesterday for Orson Scott Card’s Ender’s Game at the KOA in Minnesota; which I plan to finish tonight – here in Wisconsin. Just a few chapters to go.

I am a big fan of Card {if you want a good cry go read Lost Boys}, and I actually have a copy of the original print of Ender’s Game at home in a bin that I haven’t gotten around to reading. The copy from the exchange is a later edition that includes an introduction by Card himself that kind of makes me hate him (he bashes on archaeology and talks about Mormonism like it makes sense whereas I have a degree in anthropology and… well, I won’t get into about religion; but it surprised me – even though Lost Boys is about a Mormon family in a large Mormon community doing Mormon-y things).

So we are making the best out of the situation; I think. But what is bugging Bruce and I the most at the moment – is the bugs. I am going to go ahead and blame that one on the heat as well. It is probably great weather for the billion flies at our camp. But me and the Van are on a mission to take out as many of them as possible as we drive across the country… People at gas stations may look at us in disgust; but I’m not cleaning the windshield until we make it to the East Coast. Every splat is a badge of honor – a representation of the thousands of miles we are driving.